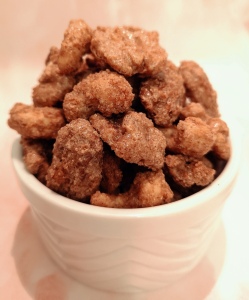 My son and I recently went to the BBC Good Food Show, and while we were there we bought some absolutely delicious cinnamon coated nuts. They were so scrumptious, and we were sad when they had all gone. I decided to have a go at making some myself.

I tried a few recipes with varying success. Some just made the nuts very sticky and then set so hard I couldn’t separate the nuts at all. The best ones used egg whites, so I knew that was the way I was going to go with mine. One thing they all lacked though was the cinnamon hit that I had loved so much at the Food Show. I love the taste of cinnamon. It is one of my all-time favourite flavours. My family share my love of the sweet spice too, so I knew I needed to add plenty to get the recipe perfect. Some recipes add vanilla to the mix. I personally preferred it without, but you can add some for even more sweetness if you want. Most recipes also add salt. That is an ingredient I very rarely use. I only add it to recipes where it is needed to cause certain reactions with other ingredients. If you fancy a sweet and salty kick though, by all means add a little bit.

I tried using different types of nut, and discovered that some work better than others. Hazelnuts and almonds are very hard, and I found they needed a lot longer in the oven at a lower temperature to get the right texture. Pecans, walnuts and cashews are not as naturally crunchy and these turned out to be our favourites for this recipe. The cinnamon coating is very crispy when the nuts have cooled, so the contrast in textures just adds even more pleasure to eating them. You can use just one type of nut or use a combination like I did. Pecans and walnuts hold more of the coating due to their bumpy surface, whereas the smoothness of cashews gives them a thin covering. All equally delicious. Don’t use ones that are already roasted or toasted though!

350g pecans, walnuts or cashews, or combination of all 3

1.5 tbsp ground cinnamon, or 1 tbsp Speculaas spice mix (you can use more or less to taste) 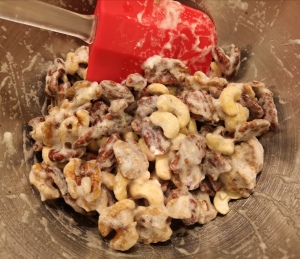 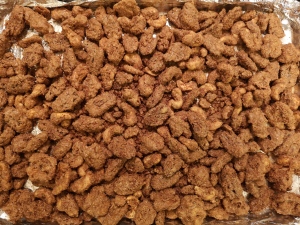 When the nuts are cooled and you are transferring them to a container for storage, you’ll find lots of crunchy bits of the coating that are left on the tray.

Don’t throw these away! They taste soooooooo good. Put these into a little jar too as they make a heavenly sweet crispy topping to sprinkle over ice cream or other desserts. You can see my little jar on the left in the photo below.

If you want to try them with speculaas spices I would recommend the vandotsch speculaas mix, available HERE.

I can guarantee you will want to make these again and again as they are totally addictive. I asked for recommendations on Twitter for the best places to buy large packs of nuts, and after checking out each one I am happy to recommend you buy them from GRAPE TREE. Their 1kg packs are the cheapest I have seen and I know from experience that they only sell top quality ingredients.

I hope you love them as much as we do. Let me know if you try them 🙂