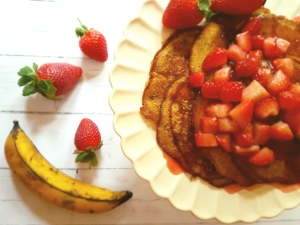 I was recently lucky enough to be invited to be part of the blog tour helping to promote Chef Mick Élysée’s new book, Not Guilty. I have to admit, until this tour I hadn’t heard of Mick (sorry), but I am so glad I have now been introduced to his recipes! 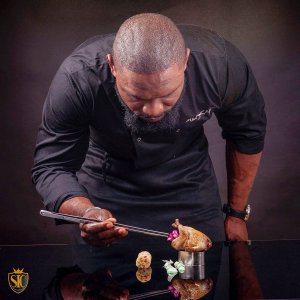 Mick grew up in the Republic of Congo, where he loved watching his mother cooking, and sneakily pinching food from the pot when she wasn’t looking. Sadly though, his happy life was soon to be turned upside down. In 1993, at the height of the Congolese Civil War, several of his family were killed. This meant that at the age of 14, Mick arrived in France as a refugee and had to adapt to a new life in an unfamiliar culture. He struggled academically, as he was not used to the French school system, but his passion for food shone through and gave him the strength to get through this traumatic time. He devoted his time to learning all about European cuisine, and in 1997 he was accepted into one of France’s most prestigious culinary schools. There, he began his classical training and worked under Michel Toulousi and Jean-Marc Desclaux. At the age of 22, just 8 years after arriving in France, Mick and his business partner opened a restaurant called La Gascogne, which received critical acclaim.

Today, Mick’s roots in the Congo play a huge part in his life. As well as the influence they have in his Afro-Fusion recipes, he is also passionate about giving back to the communities there. He regularly works with orphanages in Brazzaville and Kinshasa, and with a free school for children with physical and mental disabilities. He also provides cookery workshops for young people from disadvantaged backgrounds, as well as educational support to equip them with life skills. What a truly amazing man!

Mick’s long-awaited book Not Guilty was published just a few weeks ago. It features healthy African recipes including starters, snacks, main meals and desserts, as well as stocks to use as bases for other dishes. Every recipe has a beautiful vibrant photograph of the end result as well as step-by-step instructions on how to make them. The photographs are mouth-wateringly tempting, and I’m looking forward to making lots more of them in the near future. The book has encouraged me to look at ingredients I have never used before, and that really excites me. Exotic fruit and vegetables, and meats I have never eaten let alone cooked, this book takes you on a wonderful taste adventure.

I was tempted by lots of the recipes but decided to make the Plantain Pancakes for this review. This is the photograph in the book:

I had never eaten plantain until making these, and the recipe requires 1 very ripe plantain. As I was unfamiliar with cooking with plantain I did a bit of research so I could tell when one was ready to use. I had presumed they would be like bananas as they look so similar, but I was wrong! Plantains are used in both sweet and savoury cooking. Many savoury recipes require them to be very hard and not too ripe. In those cases it would be best to use plantains when the skin is still green. The riper the plantain, the sweeter it becomes. The shop where I bought mine sold them when they looked yellow. These are ripe, but not quite enough. I discovered that they can take weeks to fully ripen, unlike bananas which take a few days. I didn’t have weeks after I had bought mine so I read that you can ripen them quicker by placing them in a paper bag with an apple. The apple produces a gas which aids the process. I did this with one of the ones I bought, and it worked! The one in my main picture is nowhere near ripe enough, even though it is looking a bit blackened. A perfectly ripened plantain has a black skin which looks very slightly wrinkled. Imagine the look of a banana when it is too far gone to even use in recipes… that is how a very ripe plantain looks, and that is how it needs to be for this recipe. I used one like this in the pancake recipe.

To get the fruit out of the skin, simply slice each end off with a sharp knife and cut a slit from one end to the other. You can then easily peel the skin off in one go. Very ripe plantain is soft and a lovely yellowy-peachy colour inside. This means it is really easy to blend in recipes. And speaking of recipes, here is the pancake one for you to try too.

coconut oil, for frying (1 tsp per pancake + 1 tbsp for the topping)

So what did I think of my very first plantain experience? I loved it! The coconut oil adds a wonderful flavour, and the strawberry honey sauce adds an extra hit of sweetness which is just divine. My honey sauce took on the colour of the strawberries and went a lovely shade of red, so it didn’t look like the photograph in the book but it still tasted amazing! I am looking forward to making more of Chef Mick Élysée’s delicious recipes very soon. His Jollof Quinoa and Roast Chicken, and his Papaya Tart recipes are next on my agenda from this book. Yum!

If you would like to find out more about Chef Mick Élysée and his new book, including where to buy it, you can find his website HERE

This time last year there was a huge amount of excitement in our house as we were just a couple of weeks away from flying out to Orlando to see Mickey Mouse and friends. Half of me was dreading it (I imagined it would be just like a jam-packed Alton Towers for 2 weeks) and the other half of me was excited for the Disney magic. I have to say now though it was absolutely fantastic! The people were so friendly and fun, the weather was just glorious, the whole atmosphere was laid back, and the magic was definitely there. I had been kind of dreading the food too. I’d imagined just fried chicken and burgers for 2 weeks. Isn’t it funny how wrong our preconceptions can be? Three particular meals will always be remembered as some of the best food I have ever eaten. A Mexican feast in a gorgeous restaurant called Chuy’s on International Drive. A delicious meal in a restaurant called The Plaza, in Magic Kingdom. And a humungous breakfast in Denny’s Diner on International Drive. For this breakfast I chose pancakes with egg, hash browns, bacon, sausage and I think there were beans too. Can’t quite remember that part so well.  It was all soooooo good but the best part by far was the pancakes. They arrived on a separate plate and they had a cinnamon sauce and cream cheese icing drizzled over them. (Cinnamon seems to be a very big thing in Orlando).

You can’t tell from the picture but these beauties were enormous! Actually you can tell…. the plate they are on is a dinner plate! I can honestly say these were divine! The pancakes were super light and fluffy, and the sauce and icing were… it’s hard to find a word to describe how amazing these were. You know the extremely famous scene with Meg Ryan in the diner in “When Harry Met Sally”? Yes, THAT scene? Well I think she had just tried a mouthful of this dish when she filmed that! Enough said.

I have craved these pancakes ever since returning home but had no idea how to go about making them. Two days ago it was Pancake Day and I was determined to recreate the only pancakes I have thought about in the last year. It took a bit of trial and error to get the sauces right but I was deliriously happy to eventually sit at the table with a stack of fluffy pancakes and two squeezy bottles full of the 2 most delicious toppings in the world. And as I would feel selfish keeping these recipes to myself, I’m going to share them with you. These taste EXACTLY like the ones I had a year ago in Florida. I am so happy now I can enjoy them every day!!!

You can use your favourite recipe for fluffy pancakes if you already have one. I used THIS RECIPE and it made 5 good sized very light and perfectly fluffy pancakes. Some people use buttermilk but these were just perfect as they were. I actually made 2 batches so had 10 pancakes. They were just as good the next day warmed quickly in a dry frying pan. I should imagine you could warm them quickly in a microwave too in around 15 seconds. Or eat them cold! Here are the recipes for the sauces:

This sauce is at its best served slightly warm or room temperature. It is perfect for pancakes, waffles, churros, or glazing cakes. It would make a delicious dipping sauce for fruit too.

This icing is perfect for pancakes, waffles, to use as a dipping sauce, or drizzling over cakes. Leftover icing will need to be kept in the fridge and ideally used within a few days.

I had 2 squeezy bottles which I used to put mine in and they made it so easy to drizzle the sauce and the icing over my pancakes. They also make them very easy to store. Both of these recipes made enough to fill 1 and a half bottles of each, so if you don’t want that much, just halve the recipes. Although I am absolutely certain that when you try them both, especially together, you will be wanting a permanent supply of them!

As you can tell from the photo of the ones I made, I put quite a bit more sauce and icing on them than the ones I ate in Denny’s Diner. When you try them, you’ll understand why. I have no shame in saying I could even eat them on their own straight from the bottles!!! I hope you love them as much as I do. I’d love to hear what you use them for if you make them. Enjoy! 🙂