I was recently sent some grapes to sample from The Grape Artisan, who supplies Marks and Spencer Food with the most delicious grapes I have ever tasted, with varieties including Candy Floss grapes. Candy Floss!!! I’ll talk about those beauties in another recipe post. I really had no idea grapes could taste so different! I had previously thought all black grapes tasted the same, all red tasted the same, and all green tasted the same. How wrong was I!?

One of the varieties I received was a punnet of seedless Sable grapes. The packaging says “Mouth wateringly sweet with hints of muscat and blackcurrant, Sable grapes reflect their exotic origins of blended white and Persian black grape varieties.” 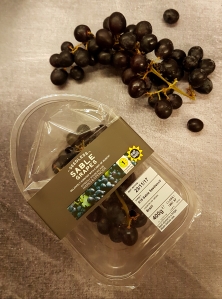 These grapes are just beautiful. They are very sweet, but not quite as sweet as 2 of the other varieties I received. They have a hint of a delicate floral honey flavour which is just sublime.

We have recently bought a waffle maker and have been trying lots of different toppings to go on the waffles. I wanted to make a hot, fruity topping which would be nice and juicy. I wondered what grapes would be like if they were roasted, and imagined the juice bursting out making a lovely syrup. I decided to try it and am so glad I did! The result was so good!

Roasting grapes really brings out their sweetness and makes them extra juicy. As they get hotter, they plump up and then split a little, causing some juice to escape. I think it is best to use red or black grapes for this, as the syrup that is made in the process takes on the beautiful colour of the grape. At this time of year (well any time really but especially this time) I love cooking or baking with cinnamon, so I used some in this recipe. It goes so well with the grape flavour! I also added a spoon of honey to help the syrup caramelise slightly.

I have to admit this is now my new favourite topping. In fact I could easily eat a bowl of these on their own or with a dollop of cream. They make a wonderful topping for waffles, pancakes, or just ice cream. I even think these would be amazing as the fruity base of a crumble. I served mine on a Belgian waffle, with a scoop of vanilla ice cream, and the hot syrup poured over that. You can use any red or black grapes, but I would highly recommend the M&S Sable ones. Delicious!

Quarter of a teaspoon of ground cinnamon, or a touch more if preferred